The artwork by Aggtelek (Gema Perales (1982) and Xandro Valles (1978), Barcelona) exists at the boundaries where performance, installation and ephemeral sculpture overlap. The principal axis of their work is the reflection of how the creative processes are shaped by artists’ interaction with space and its material aspects. Within their activity, artists playfully construct, deconstruct and reconstruct sculptures, characters, objects as well as the scene itself, mainly using cardboard boxes, scotch tape and paint. If the video is the centre of their artwork, the objects presented as well as the scene of the artwork emerge as traces and memory of the evolutionary structure of their performance.

In the second personal exhibition of Ass-Dialectics in Jozsa Gallery, artists play with their creative process. The eponymous film marks the rift between the visual ideas as well as the sculptural references of their artwork and their two previous videos -- Ensayos Escultoricos (Sculptural Essays) -- that adopted the accelerated cartoon rythm of silent movies. This time, video played at normal speed reformulates and newly reshapes the references.

Even the concept itself of sculpture is called into question. This question is raised very seriously, but at the same time with much derision and considerable amounts of autoderision. In an era when art cannot help but conceptualize every object, Aggtelek directly targets this aesthetic perception without holding back.

The references to art history have always been embedded in these pieces. This installation is not an exception. In a 17-minute-long video, the following can be seen: the McDonald's logo, the equestrian statue of Genghis Khan, references to food and the face of Paul McCarthy, Huesitos chocolate candy, as well as the performances and faces of Bruce Nauman, experimental film creator Robert Downey, the fluxus mouvement, Max Ernst, Jeff Koons, Jason Rhoades, Kazimir Malevich, pornographic mangas, Klaus Rinke, Helio Oiticica, Martin Heidegger, Quinki cinema… 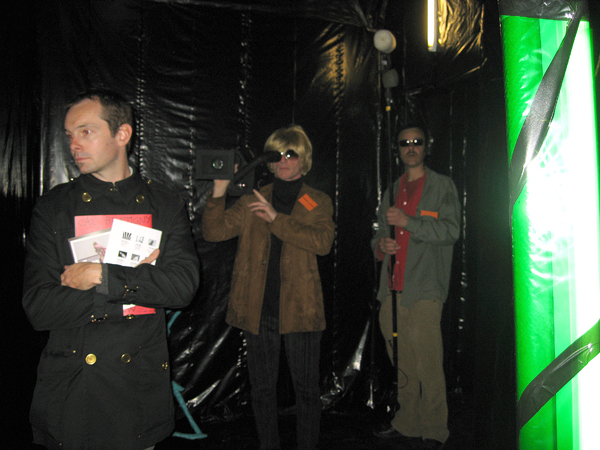